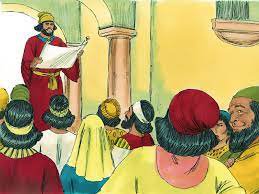 When the seventh month came - the people of Israel being settled in their towns - all the people gathered together into the square before the Water Gate. They told the scribe Ezra to bring the book of the law of Moses, which the Lord had given to Israel. Accordingly, the priest Ezra brought the law before the assembly, both men and women and all who could hear with understanding. He read from it facing the square before the Water Gate from early morning until midday...and the ears of all the people were attentive to the book of the law. The scribe Ezra stood on a wooden platform that had been made for the purpose...and Ezra opened the book in the sight of all the people, for he was standing above all the people ; and when he opened it, all the people stood up. Then Ezra blessed the Lord, the great God, and all the people answered, 'Amen. Amen', lifting up their hands. Then they bowed their heads and worshipped the Lord with their faces to the ground. Also .... the Levites helped the people to understand the law, while the people remained in their places. So they read from the book, from the law of God, with interpretation. They gave the sense, so that the people understood the reading.

47 years after the Jerusalem was destroyed in 586 BCE and the Jews were deported to Babylon, King Cyrus who had himself defeated the Babylonians, allowed those who wished, to return to their homeland. They came in waves and despite problems in due course built the Second Temple in Jerusalem. Ezra the scribe, apparently has an official government position but he is also a priest, and it is he who will fight against the lax observance of the law.

Look again at the passage above and observe their reactions. The people respond "Amen, Amen." after Ezra blesses the Lord. They are saying "So be it!", or "We agree!" perhaps. They lift their hands in worship to God - many churches today do the same! The Scripture is read and then explained - our bible is read in church today, and it is interpreted in the sermon, so that we to understand the reading!

My work in these 'Thoughts for the Day' is to interpret the Scriptures - for myself, and for you! - and hopefully we can all say "Amen! Amen!"

Heavenly Father,
speak to us through Your holy word
found in the Bible.
Give us the light of understanding
so that we might apply what we have learnt
to our daily life.
Keep us ever questioning and ever learning
so that we may continue to grow in faith
as Your people.
Amen.

Find out more about Ezra: