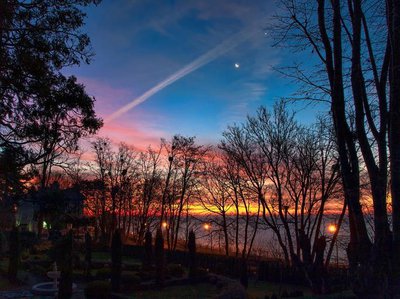 In those days Mary set out and went with haste to a Judean town in the hill country, where she entered the house of Zechariah and greeted Elizabeth. When Elizabeth heard Mary's greeting, the child leapt in her womb. And Elizabeth was filled with the Holy Spirit and exclaimed with a loud cry, 'Blessed are you among women, and blessed is the fruit of your womb. And why has this happened to me, that the mother of my Lord comes to me? For as soon as I heard the sound of your greeting, the child in my womb leapt for joy. And blessed is she who believed that there would be a fulfilment of what was spoken to her by the Lord.'

The fifth 'O Antiphon' that gives us the titles for Jesus, the Messiah, is translated 'O Dayspring' or 'O Radiant Dawn', or 'O Morning Star'. Isaiah Chapter 9.2 says:

'The people who walked in darkness
have seen a great light;
those who lived in a land of deep darkness -
on them light has shone.'

The 'morning star', which is another name for the planet Venus, appears in the sky just before dawn and is the harbinger of a new day. In the same way Jesus brings light in the form of the hope of justice and eternal life to our world. Before his birth our world lived in the shadow of death, now a new day has dawned, thanks to the glad acceptance of the angel's words by Mary.

O Wisdom,
O Lord,
O root of Jesse,
O key of David,
O Dayspring,
creator of the world
and ruler of Your people,
we remember that You
came to live among us
as a baby,
in order to offer us eternal life.
Amen.

Malcolm Guite singer-songwriter, poet, and priest says of this, the fifth 'O Antiphon':

'The fifth great ‘O antiphon' calls on Christ as the ‘Oriens’, the Morning Star, the Dayspring, and it comes as an answer to the sense of darkness and captivity existing. I find the idea of Christ as the rising light in the East very moving, for he is Alpha, the ‘Beginning’. The Translation which gives ‘Dayspring’ for Oriens I especially love, both because ‘Dayspring’ suggests at one and the same time, both light and water, two primal goods in life which I love in combination, especially light reflected on water. ' (See: https://malcolmguite.wordpress.com/2010/12/17/o-oriens-a-fifth-advent-reflection/ )

I have copied Malcom's Sonnet on this O Antiphon below:

The shift and shimmer of another river
Flowing unbidden from its hidden source;
The Day-Spring, the eternal Prima Vera.

Blake saw it too. Dante and Beatrice
Are bathing in it now, away upstream…
So every trace of light begins a grace

In me, a beckoning. The smallest gleam
Is somehow a beginning and a calling;
“Sleeper awake, the darkness was a dream

For you will see the Dayspring at your waking,
Beyond your long last line the dawn is breaking." '